It 's Make It Monday time over at Papertrey Ink.  I love how they've been making all their Make It Monday challenges around the holiday theme.  In this week's challenge, Lexi Daly shows us how to make photo ornaments.  It's a great idea to make your own ornaments and add that personal touch with photos. 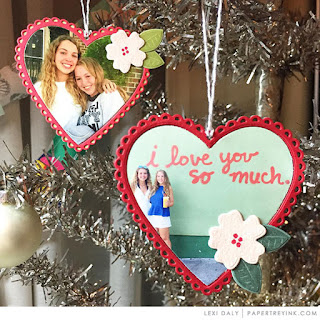 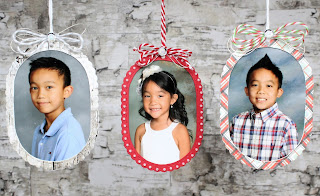 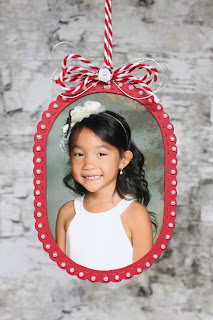 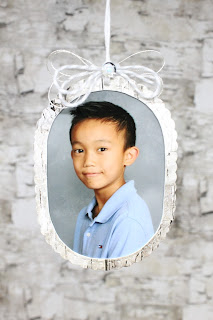 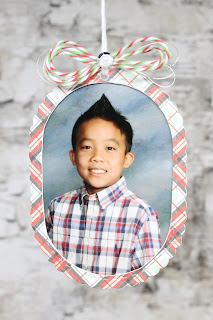 I couldn't just make one ornament since I have three children, so I made three ornaments- one for my each of them. I used the oval tag base from the Make It Market: Wonderland Kit to create my ornaments. 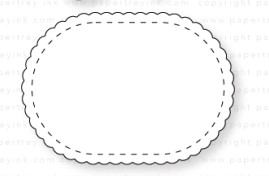 I used my children's school photos for the ornaments.  I have so many wallet sized photos of their school pictures. Don't you always have a ton left over and don't know what to do with them?  Well, now's a perfect time to pull them out and make some ornaments with them.

For my daughter's ornament, I die cut three of the oval tag base from red card stock and also die cut my daughter's photo with it.  (The photo was narrower than the oval tag base die but it didn't matter because I only needed the inside stitched oval part, not the whole base with the scallop.)  After die cutting all the pieces, I cut the photo down by just cutting on the stitching all the way around (basically cutting off the scallop edge).  Then taking two of the red die cuts, cut the middle out by cutting right inside, next to the stitching.  For this,  you are basically making the frame, so you want only the scallop and stitching edge and not the middle part of the die cut.  I made two of these because I wanted to make the frame a little thicker.  After cutting out the two red frames, I glued them together.  For the assembly of my ornament, I adhered the photo inside the third red die cut, placing it right in the middle.  Then, I added the red frames on top.  I punched a hole on the top of the ornament, added red and white twine as well as some silver thread.  Then I added a silver sequin and placed a pearl inside the sequin.  I also added tiny pearls around the scallop edge.

My other two ornaments were created the same way, except I skipped the scallop edged pearls and used different papers for the frames.  For one of them, I used the Birch wrapping paper from Pier 1.  For my last ornament, I used the pattern paper that came with the Wonderland Kit.  I think they came out really cute and can't wait to hang them on our tree this year, as soon as I can get it up.  Thanks for stopping in everyone!  Have a Happy Thanksgiving!

Hlee
Hi! I'm Hlee and welcome to my blog! I enjoy creating and designing cards, scrapbooking, sewing, crocheting, and cooking. I am addicted to paper crafting, and if I could spend all day in my craft room, I would. Unfortunately, life often gets in the way. I'm a wife and a mom of three growing kids. Whenever I can spare a few minutes, I'm often hiding and creating in my craft room. I'm so glad you're here and I can't wait to share all of my projects with you on this blog! I hope you can create with me and join me in my crafting journey.